This is a submission to Game Off 2017

View the submission page for this entry

A downloadable game for Windows and Linux

How did this game come to life?

Propan was spiritually influenced by the game Helious from the early 90's. An urban legend tells that the game's creator, Sean Puckett, is not the original developer of the game, but that a UFO visited his house and the game was transferred to his computer by aliens during a stormy night. This enabled the peculiar story to be subtitled "How to Produce a Game in Eight Days."

Considering the nature of this game, and the opening of the GitHub Game Off 2017 event, I took the challenge of creating some sort of spin-off to Helious, by allocating my little spare time available to development. The first day, I got the project and the game engine set up. On the second day, I had a moving ball on the screen. And things went going until the 8th day. Just after the same number of days that Helious claimed to be produced in, I got very ill, and became incapable of working on the game for a whole week. The few days remaining, after the recovery and before the deadline, were dedicated to sprinting the necessary parts to have just enough for a "game-like" experience.

So anyway, I open-sourced everything under a permissive license. Hopefully the community will learn a bit from the code and give something back. It should be safe to say that no aliens were involved in interfering with this work. Or at least I think it is.

And yes, it's a Monet in the title screen. It seemed appropriate.

Once in the main menu, select a game level with the arrow keys on your keyboard.

While in the game, use the directional keys (or the keypad numbers 2, 4, 6, and 8) to move the ball by applying accelerations in those directions. The objective of each level is to collect all gems and touch the finish flag.

Things to look out for

You can enter the level editor by pressing "E", or by running the program with the subcommand editor.

At the moment, loading a level requires the command line as well:

In this mode, you have to use the mouse.

For more information and the latest updates to this game, please visit the  game's  GitHub repository. 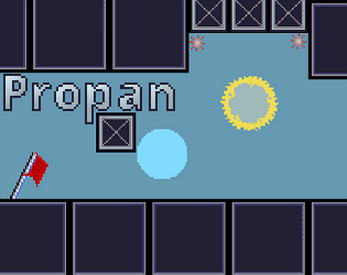